The current subject I've been listening to has been the life and times of Sidney Rittenberg, a classic communist idealist - intelligent, idealistic, a man with - no doubt - strong convictions. Like so many who have dedicated themselves to the cause of molding society into compelled conformity (something they call, "equality"), Rittenberg, in spite of his intellect and devotion to a cause, was an idiot (I realize that his life was a million times more grand than my own - but I can still note, quite accurately, that, he's an idiot).

What struck me most about the events of Rittenberg's life is the all too common theme that runs through the lives of many communists and communist "fellow travelers," being ill-treated or imprisoned on more than one occasion (by the communists they follow), and seeing up close the in-you-face failings of socialism in action, and still remaining dedicated.

I realize it may be Socialism Lite, but one finds this with followers of the current U.S. president as well. No matter how weak, corrupt or ineffective he shows himself to be, he is still adored by many and can literally "do no wrong."

When a political figure I admire screws up and shows their human failings or hypocricy, I cringe with embarrassment for them and basically distance myself from any support I may have shown. I'd dare say that this is because conservatives (and libertarians) are generally motivated by seeking to achieve practical ends - not so much, "dreams and visions." The rhetoric is sometimes required of course, but in the end we want things that work and achieve positive results. The left will fund a plethora of projects that have clearly failed, advocate spending billions to "solve global warming" (even as average temperatures remain static or decline), and swear that a president who has clearly accomplished nothing (and done considerable damage) belongs on Mt. Rushmore.

I've written it several times before; idealism is a wonderful spark to creative enterprises - to art, music, and literature. To direct the temperament of an artist to the ends of structuring society is useless...and I might add that devotees of such causes are...idiots.

The Media and Stockholm Syndrome

Somewhat off-topic but, oh well. I was going through some old papers recently and found this little gem (the photos below).

I've always loved the concept of "synchronicity" as defined by Swiss psychologist, Carl Jung. Most people are somewhat familiar with the concept as an expression of "meaningful coincidence." Some coincidences/synchronicities are rather mundane and relatively unimpressive. Some are utterly bizarre, amazing, or shocking. I've read several books on the subject as well as Jung's comments on it. I don't find it particularly mystical or "magical" but I do find it very intriguing. I've seen some good ones. One of them is the one below.

To my knowledge no one has commented on this. Surely someone had to have noticed it. A couple of years after 9/11 (the 9/11) I was leafing through some random magazines at work and saw this. As you can see from the date of the magazine (at the bottom right of the page after the Manhattan photo), it was the edition which came out the month before the terrorist attack. In addition, such an ad obviously would have been planned and laid out earlier than the August magazine publication date.

It's fairly self-explanatory; a Yahoo ad that plays on the concept of being "left out" by suggesting you use a product to feel "left in." Their mildly witty symbol is an old photo of New York's financial district skyline with a very obvious modern feature that one was used to seeing, -- the World Trade Center buildings -- "left out."

As with all synchronicities, one can write it off as "mere coincidence" or micro-analyze it enough to explain it away as being nothing out of the ordinary.

...but, I like synchronicities so I'm going to say this is a valid one and it's just plain weird.

I'm sure some conspiratorial types would like to read something beyond a synchronicity or coincidence into it.

Appraise at will and draw your own conclusions. 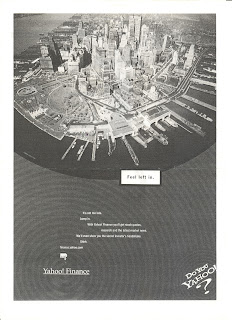 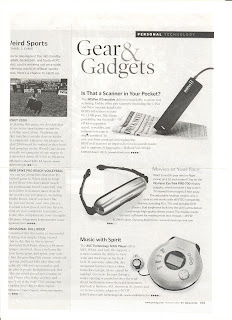 S & M for Nations and Peoples

Acting in moderation is different than not acting at all. For a nation (or like entity), the pages of history hammer home the truth that war-mongers and pacifists alike...get their asses kicked in the end (no pun intended).